The Dream of 21 Hairpin Bends 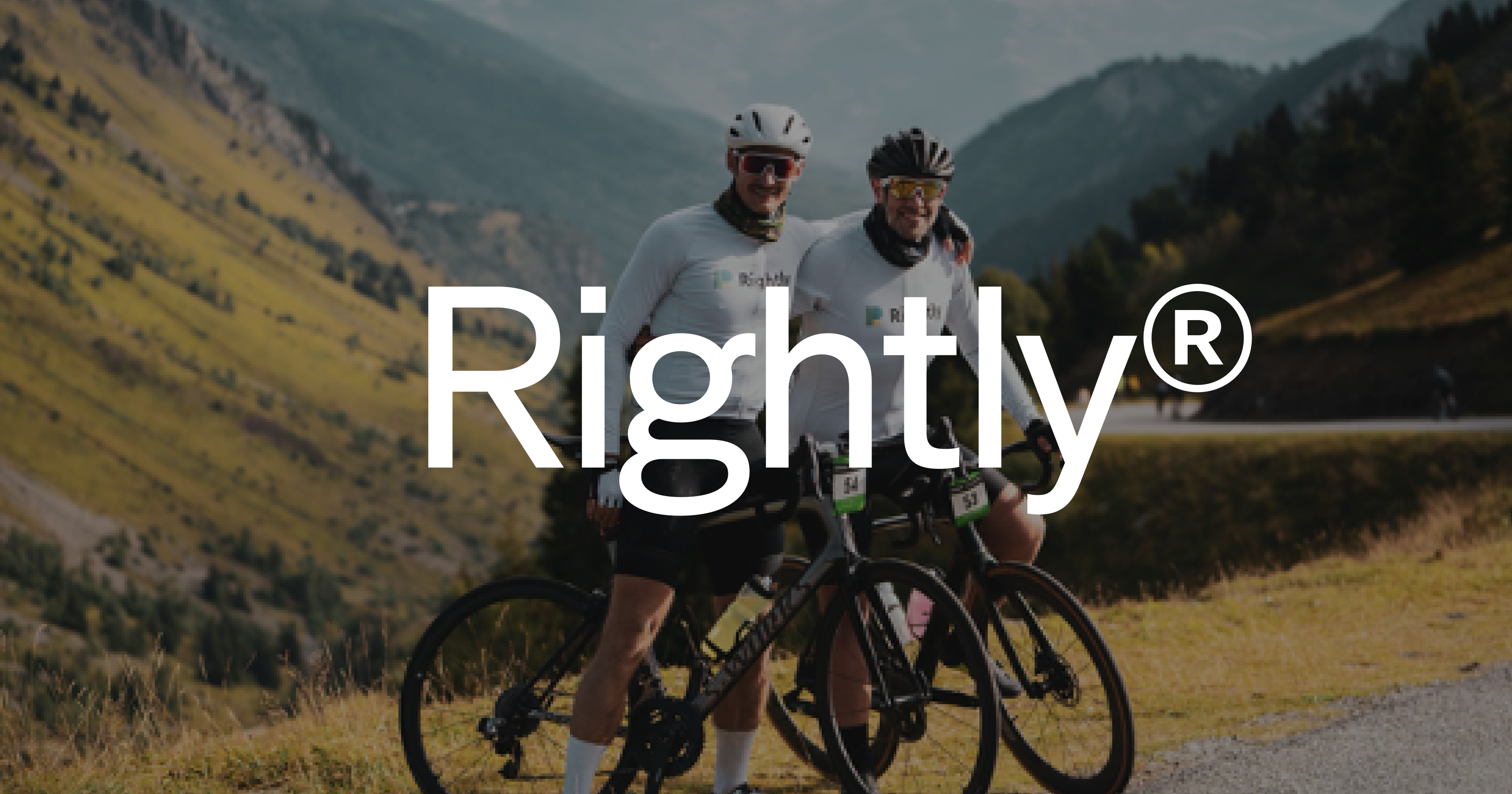 It started out as bet between Bjørn and I.

I wanted run a marathon on the Great Wall of China but when I got diagnosed with a disc herniation in the neck during October 2020, I was prohibited from continuing my plan to reach my goal. Then Bjørn encouraged me to start riding the bike. We made the bet that when he completed his goal – then we would buy tickets to participate in the 2021 edition of the La Marmotte race.

We started planning the training and motivated each other using the Strava app to set weekly, monthly and yearly goals. Some were met but most important was that we kept on motivating each other to see the ultimate dream come true; My dream was to finish without stopping on the way up the climbs to the 4 mountain tops (Col du Glandon, Col du Telegraphe, Col du Galibier and Alpe d’Huez).

Fifteen days prior to the race I was on my way home from the office on my bike. A 45 kilometre ride with only a few altitude meters, but luckily a lot of wind to increase the effect of the training. I had just climbed a hill on the Ringvejen when a cat was sitting in the middle of the road.

Obviously, it had to move as I was approaching. Unfortunately for both the cat and myself, it waited too long so it ran into my front wheel providing me with the knowledge that I can't fly. The cat was fine. I definitely got the worse end of the deal. A fantastic guy, Simon, saw the accident and stopped to check if I was okay.

My response; yes. His comment: No you are not. So, he helped me to the sidewalk and went home to pick up his car to drive me to the hospital. And he waited while I was in the ER to get cleaned up and stitched together. I got two stitches next to my right eye and two in my left knee. My right knee was swollen to the size of an orange. I spent two days sleeping and eating by myself as my three wonderful boys thought I looked scary, so they didn’t want to eat with me.

Eight days prior to the race I got the stitches removed and I then waited one more day to get on my bike again.

That was my first time ever descending a mountain and climbing one. The last day before the race we spent buying bananas and souvenirs and the final prepping.

Saturday September 4, 2021, we got up at 05.15 to eat wheat and get in the gear. And at 06.00 we exited the apartment to start slowly to descend Alpe d’Huez to ride to the starting line. It was my second descent, it had rained all night, so the pavement was wet, and it was dark outside. 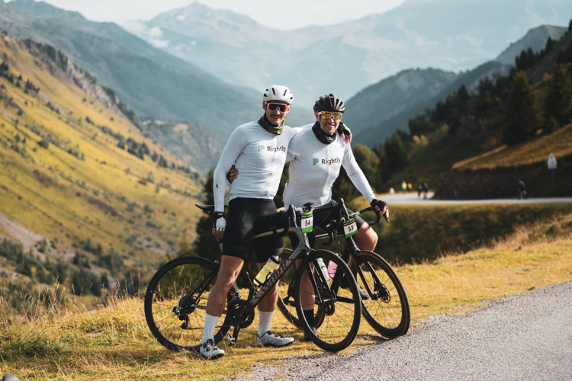 We were excited and yet also curious about what might happen the rest of the day. The first climb was up Col du Glandon (1.942 meters). We were in great spirits and talked to other riders, laughing and cheering the others. Many were probably thinking; shut up and save your energy boys! But the climb was good and the view of the mountains was fantastic as the sun rose.

We reached the top of Col du Glandon still smiling and laughing.

After having changed to dry shirts we started the descent. Magnificent. Stunning. Simply beautiful scenery spoiled us the next half an hour until we came to the valley and the city Saint-Michel-de-Maurienne where 40 kilometres of uphill transporting started to take us to the foot of the Col du Telegraphe (1.566 meters). Normally 40 kilometres uphill is a normal training ride bearing in mind that we don’t have mountains in Denmark and no “climb” in Denmark exceeds 2 kilometres.

Col du Telegraphe was tough. Halfway to the top we had the most amazing view of the valley and the very steep edges encouraged us to ride in the middle of the road. However, as the road wasn’t closed cars and motorcycles passed us numerous times until we got to the top spoiling us with the view of the terrifying edges when having to ride far right on the road. As we got to the top my right knee was done!

We got something to eat and drink and after a few minutes we continued.

There was a 4 kilometres descent until the climb of Col du Galibier (2.642 meters). The decent was fast, too fast, and I wasn’t really ready to start the 19 kilometres climb to the top of Col du Galibier. The start of the climbing was through the city Valloire and from there it went on up and up until we got out of the city and yet again was spoiled with a beautiful landscape.

Col du Galibier has for many years been labeled as the most iconic climb of the Tour de France. I can now understand why! The name Galibier means “something significant” and it sure is. To compare the Alpe d’Huez is 20 kilometres shorter, and climbs just of half of the vertical metres as Col du Galibier. As we crossed a river by a small bridge we still had 10 kilometres to the top and I was exhausted! Barely making the speed of 8 kilometres per hour I still had more than one hour in a constant battle with myself and my will to continue pushing whatever I had left into my pedals.

Bjørn's tireless motivation kept telling me “200 more meters, then it will flatten out”. But it never did! 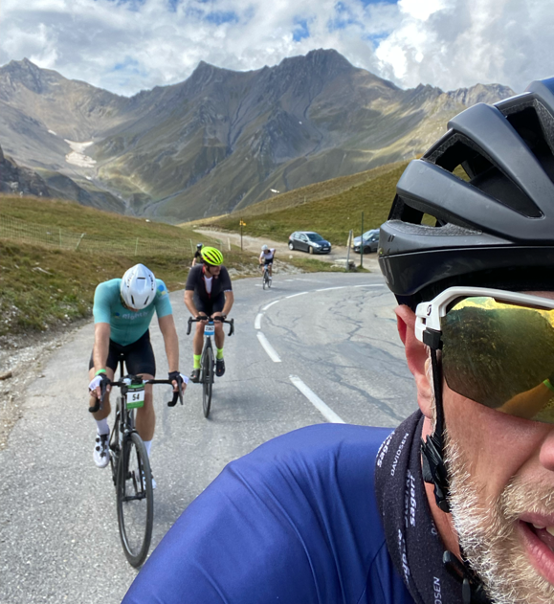 Bjørn gave me a banana and water and literally wings to finally reach the top. The Allroads.cc deposit was 4 bends down, so we didn’t stop to see the memorial of Marco Pantani or the view which with guarantee would have been “something significant”. At the deposit we changed to dry shirts for the final long descent before reaching the root of Alpe d’Huez.

I knew I had to eat but I couldn't get my jaws to chew more sandwich bread with ham and cheese. I was exhausted! We had time and energy to talk to some of the other Danes making a stop, but the laughing only came from Bjørn. None of the others in that deposit could muster a laugh. Bjørn was still full good spirit, enjoying the ride and partly energetic. I was not.

We still had 60 kilometres to the finish line.

The descent from Col du Galibier was by far the most pleasant and except the 10 kilometres descent from Col du Glandon, also the most beautiful. We passed several tunnels. They were dark and even darker seen through sunglasses. We had to stomp the pedals the last 10 kilometres to the root of Alpe d’Huez but there was no energy left. I ate 2 energy bars and splashed a sugar gel in my mouth in a panicked attempt to fill my body with energy to reach the finish line at the top of Alpe d’Huez.

The climb to the top of Alpe d’Huez starts instantly after a left swing hitting 11-13 % ascending for the first 2.5 kilometres. On the home trainer I climbed Alpe d’Huez a few times in 1 hour and 15 minutes. But sadly, my cycle computer showed a speed of 7.2 and having to ride 13.5 kilometres I could do the math – it would take me closer to two hours to reach the finish line.

I had to break down the mountain in one of the famous 21-hairpin bends at the time. Having conquered the first 5 I started to break down the rest of the way by 10 metres only having 8.78 kilometres and then 8.77 kilometres to go. My stomach was empty. My muscles were weakest ever. My body was done. 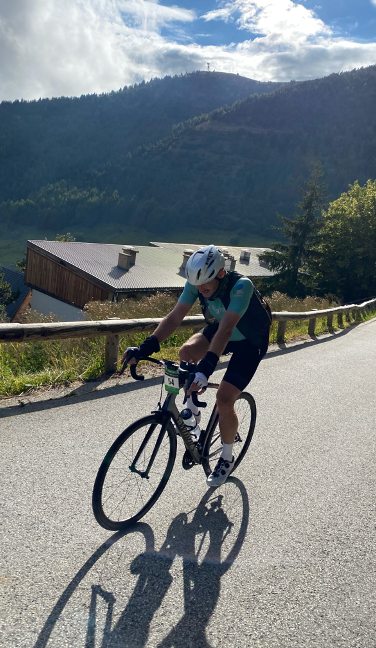 In Denmark during the summer, I was so cocky stating that “of course I would finish. It is a matter of willpower” numerous times. Those statements out loud were my biggest motivation, I would never let anyone have the satisfaction of telling me that I obviously didn’t have enough willpower.

Having 10 bends left, Bjørn dug deep in his motivation toolbox and Facetimed my wife Berit to let her see that I could and would finish without stopping. The fact that Bjørn had so much energy and power left that he could ride with one hand on the wheel while gripping his phone to call Berit, is quite an awesome achievement in itself – but then spending the last 45 minutes motivating me, talking to me and bringing me food and water was amazing.

And when I dropped my sunglasses and said f**k it, he demanded that I continue so he could stop, pick up my sunglasses and catch up with me in a few seconds. Bjørns physical and mental strength never ceases to amaze me! Without him next to me I would never have reached my dream. My dream to finish the La Marmotte race without having to stop during the climbs.

Having Bjørn next to me daily will make it possible to strategise how to execute on our plans to reach our dream of having IP Professionals worldwide, collaborating through Rightly's  innovative platform for people and the planet.

We reached one dream. On to the next!

Bjørn you are amazing! Thank you.

And of course, thank you Berit for encouraging and supporting me to pursue another dream of mine #loveyou

Rightly has been recognised at the AI Awards!

We are thrilled to announce that we have been recognized at the 2nd annual Artificial Intelligence Awards, hosted by Corporate Vision, and have been...